Reclaiming Evolution From the “Angels”

Children Depict Cosmic Creation in Dance
Open school might never be the same at Mercy Montessori Center in Walnut Hills, following Tuesday night’s unusual dance performance by children, “Cosmos in Motion.” Dubbed a “mixed media choreographic improvisation” by its director, Fanchon Shur, “Cosmos” starred some two dozen boys and girls cast as whirling molecules. Any adult who remembers suffering the part of a tree in grade school productions past, would have found the spontaneity and imagination of “Cosmos in Motion” difficult to resist. 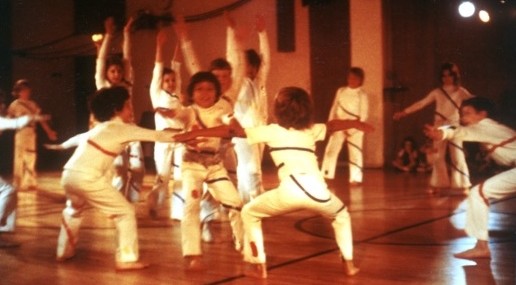 The most remarkable aspect of “Cosmos” might well be that none of the choreography was taught; yet all the children’s movements were similar. By the end of the piece they had reenacted the rise of volcanoes, the formation of protozoa and plant life, and the rise of animals, culminating in man as a mammal having a mind and spiritual soul. 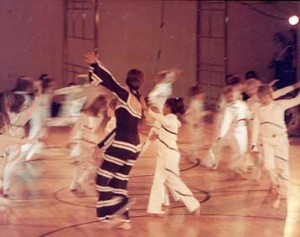 A strobe light began to flicker like some great primeval beam, and the dancers moved across the floor simulating the nebula of gas and dust, from which the earth originated like a whirlpool. An eerie and appropriate tape accompaniment, prepared by Mrs. Shur’s composer/husband, Bonia Shur, featured overlapping of synthesized Bach, slowed down Stravinsky, and upside down Stockhausen, as well as the children’s own voices.

“Cosmos” was inspired by a Montessori curriculum unit for the school’s second and third division (that means seven and eight year olds), which explains the story of how the earth was formed five billion years ago. Mrs. Shur, a West Coast dancer and choreographer newly settled in Cincinnati, saw in the classroom materials a departure point for exploring the mysteries of creation through dance.

With a seal of approval from the non-denominational school’s principle, Sister Jacinta, and with the cooperation of the group’s teacher, Linda Preston, Mrs. Shur worked with the youngsters in what she calls “structured improvisations”. The sessions were designed to teach how all motion has a connection with the movements you can make with your own body.

According to Mrs. Shur, movement can be used to explore concepts in math, physics, social studies, in fact, almost anything. Dance itself can be tied to the everyday movements we all do without thinking, like breathing in and out.

“Would you mind falling down?” Mrs. Shur asked some youngsters in a brief lecture/demonstration preceding the performance. Several happily obliged, flopping to the gymnasium floor with thuds.

”Now try falling down without falling,” ordered the dynamic Mrs. Shur, and the children floated slowly and softly through space in curving flowing movements.

“That’s how it felt to be a molecule at the beginning of time, when there was no gravity to exert a pull.”

Then they stood tall, “experiencing themselves as beings in the center of the universe”, according to Mrs. Shur, and whispered in chant, “I am, I am”. Parents were invited to participate, joining hands and chanting, “we are, we are.”

Our Cosmos in Motion begins five billion years ago.

An enormous cloud of dust and gas is drifting in space.
We feel the gravitational attraction pulling material of the giant cloud towards its own center.

In-flowing gasses and dust particles will form a giant whirlpool.

All matter will spiral inwards until centrifugal force will make the cloud flatten out like a giant wheel.

In the center of the wheel – a compressed sphere, so hot that it begins to glow, becomes our sun.

In the great wheel – eddies of dust and gas are forming.
There, whirlpools are circling about the sun.

In the third orbit travels a whirlpool that will become our own earth.

As our earth spun around, some part of the whirlpool was turning toward the sun and warming up, and another part was always turning away and getting cold.

Where it is hot, molecules are expanding and repelling each other and where it is cold, water vapor molecules and other gasses collide and freeze together forming larger masses.

Finally, most of the solid matter will gather to the center to create a planet and a thin crust.
Inside the crust are buried the liquids and ices.

The earth’s core is molten. There, trapped, buried vapors try to escape through cracks in the crust.

Volcanoes open up, exploding steam blasted clouds of rock dust and vapors into the sky, forming an atmosphere, blocking the sun, giving time for the earth to cool.

Steams in the sky condense into water droplets, and soon the first rains are pelting on the crusted face of the earth.

Organic molecules are formed. The first cells swim in warm liquid. Soon, microscopic plants will fill the seas and tiny organisms will devour them.

My parents of the past, take my hand
in the present, through me the cosmos is moving toward the future.

We are the Cosmos in Motion
As we spiral toward the center,
the energy of our community tightens,
and we begin to glow….. like the sun.

We are the Cosmos in Motion.

But – that doesn’t really fit, because I’m always ME!

by Tia Burroughs, a student

As part of our cultural studies program, we are choreographing a

Our own auditorium will become the great, infinite cosmos,

and we have made a special place for you to sit,

on the very edges of outer space.  We hope you will

dress comfortably, since there are no chairs at all in outer space.

It happens that the end of our COSMIC DANCE is

the beginning of our own selves as human beings,

and we have created a special way

to celebrate it together with you,

Fanchon Shur, our director, and Linda Preston, our teacher

Excitedly await with us JUNE 3: TUESDAY 7:30 when…

vapors freeze while molecules melt and

and life is born.”