The Shechinah Is With Her

……………..SHECHINAH – Jewish cabalistic word for the female “Source of All Soul in the Universe.” The Hebrew “Shechinah” means “dwelling place”, a hint that God is lost without his home, the feminine………………. 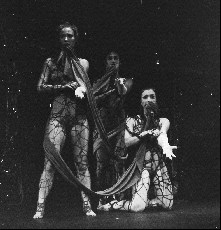 In 1974, Fanchon Shur took a fresh look at how the nurturing mother empowers her child with emotional strength and security. Boy child and girl child alike need mother’s abundance of passion, exuberance and courage. She became aware that we live in a death-driven culture with a 10,000-year history of isolating the mother’s source of abundance by perpetuating spiritual matricide. The power structures of the ancient life-centered agricultural societies revered the Goddess. She was everywhere, Creator of the universe and its laws, ruler of Nature, Fate, Time, Eternity, Truth, Wisdom, Justice, Love, Birth and Death. This is the spiritual inheritence of wise, nurturant, courageous women. It is Fanchon’s personal experience that women’s vitality and power is rooted in the embodiment of the primacy and sacrality of the Birthing Experience in our evolutionary memory; its terrifying, powerful encounter with gravity’s descent to the core experienced by the mother as volcanic pressure in utero when the infant pushes towards birth and finally, the volcanic eruption of the childbirth itself. 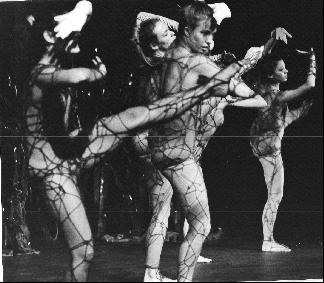 Third Movement – RAPE AND SHAME
Woman and her mirror image meet the dominating physical violence of patriarchy; raped, put down. So begins the turning of her power inward on herself – into shame and self-destructiveness.

Fourth Movement – WHITE GLOVES: THE SURVIVAL GAME
With a white glove on her hand, her submission and irrepressible instinctive passion weave into a game for survival. She disguises her seething rebellion in behavior alternating between wooing, hiding, plotting, flirting, abortive revenge – until she fully emerges as a demoness. At this point, the dancers put on long cloths symbolizing the costumes of submissive women; the Madonna, the Geisha, the Eternally pregnant Mother.

Fifth Movement – REBIRTH WITH THE SHEKINAH (Divine Presence)
The women re-emerge from their fertile cave as midwives and birth-givers, wiser than before. They transform the cloths that bound them into umbilical cords of strength and support in the full presence of the Goddess.

Womonkind from Fanchon Shur on Vimeo.

“WOMONKIND: The Shechinah is with Her” was choreographed in 1974 for Dance Theatre Seattle and has been performed as recently as 1992.